Forecasts agree: The winter in northern Europe will be mild and wet this year 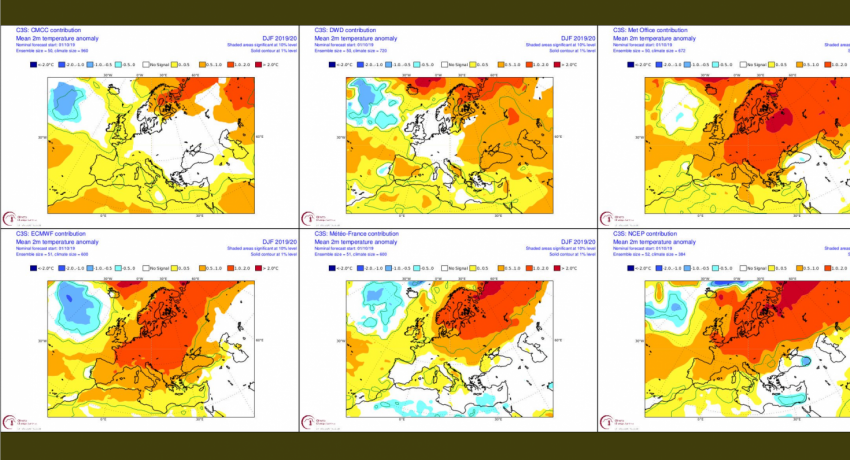 Something unusual has happened: All existing global weather models agree that there is a high chance of a wetter and milder winter than normal in northern Europe this year. CICERO researcher and climatologist Nathalie Schaller explains why.

If you live in northern Europe, I bet you have at least once in your life thought: “the weather today is crazy!”. And all of us weather forecasters and climatologists would in fact agree with you!

The climate variability as we call it – which simply means the range of possible meteorological conditions – is very large in the mid- to high latitudes, such as in northern Europe.

We can have days in the summer when the temperature is above 30⁰C, and during the winter, temperatures sometimes drop well below zero. We can have weeks of dry and sunny weather, and then wind and rain for days. The temperature can drop by more than 15⁰C within one day. I think you see my point.

The reason behind these very different types of weather can often be found in the location of the jet stream, a high-altitude (around 10 km) very fast-flowing and narrow air current. If you sit below the jet stream, chances are high that you’re experiencing stormy weather. However, if you are south of the jet stream, you are luckier and might enjoy a sunny day.

Weather forecast models are very good at predicting the weather for the next few days, sometimes up to ten days, including the position of the jet stream. So even if the weather appears crazy – or chaotic, which is a more scientific way of saying it – there is still some predictability in the atmosphere on these shorter time scales.

However, if we want to know how the weather will be past these ten days, the forecasts can be all over the place, which means that there is little to no predictability, at least in places like northern Europe.

An exception to the rule: The NAO

However, there are a few exceptions. As a matter of fact, there is a weather phenomenon in the North Atlantic Ocean that during some winters can give us a degree of predictability when it is strong enough. This is the so-called North Atlantic Oscillation (or NAO), and as the name suggests, it describes a fluctuation of atmospheric pressures at sea level.

What we do in atmospheric science to quantify the NAO, is to calculate the sea level pressure difference between a weather station in Iceland, and one on the Portuguese island group Acores, i.e. the NAO index.

If the NAO index is neither strongly positive nor negative, which happens in some winters, then there is not much predictability, and we can’t say much about what to expect for the winter to come.

And this is all because the jet stream is meandering between these areas of high and low pressures in the North Atlantic. If the NAO is positive, then the jet stream heads directly towards northern Europe, bringing warmer and wetter weather, while southern Europe experiences cooler and drier conditions.

The average of the latest precipitation forecasts from The Euro-Mediterranean Center on Climate Change (CMCC), The German Weather Service (DWD), the UK'S Met Office, the European Centre for Medium-Range Weather Forecasts (ECMWF), Météo-France and the US National Weather Service's NCEP.

Milder than normal in the north, colder in the south

The current generation of seasonal forecast models are now usually able to predict the sign of the NAO for the coming winter, and this is useful for many industries, and the energy sector in particular.

While seasonal forecast models are not meant to tell us the exact weather two months from now, if most of the existing six worldwide models agree on the sign of the winter NAO, then the confidence in this prediction is high.

And for this coming winter, the six seasonal forecast models from the world’s leading weather agencies predict a relatively strong positive NAO for November to February. These forecasts are calculated once a month, and the newest set was released on 14 October.

While people might be more or less enthused by the prospect of warmer and wetter conditions in northern Europe this winter, and cooler and drier conditions in southern Europe, the fact that all models show a similar and strong signal is very exciting for atmospheric scientists.

In this very chaotic part of the world weather-wise, having such a nice and clear prediction for the coming season is rare! Now we have to wait and see if the prediction is correct. 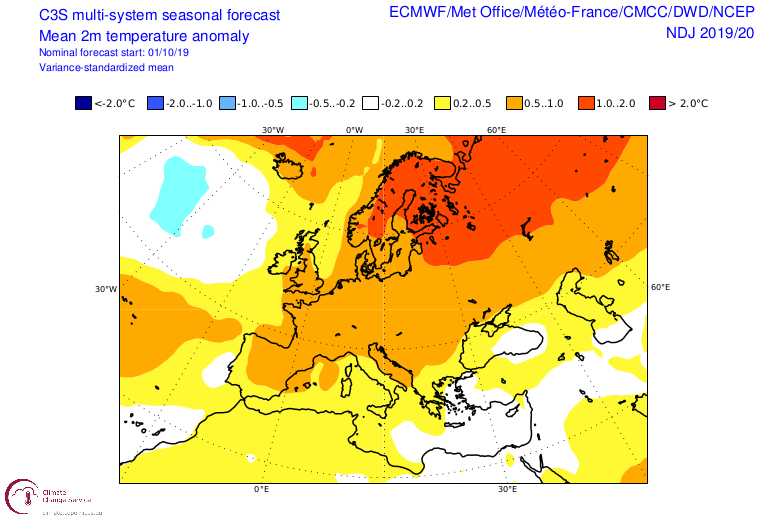 The average of the latest temperature forecasts from The Euro-Mediterranean Center on Climate Change (CMCC), The German Weather Service (DWD), the UK'S Met Office, the European Centre for Medium-Range Weather Forecasts (ECMWF), Météo-France and the US National Weather Service's NCEP.

This is bad news for people in northern Europe who are looking forward to skiing this winter, but good news for everyone there who is worried about high electricity bills.

A mild winter in northern Europe means lower power demand than during an average winter due to lower need for electricity for heating. And a wet winter with temperatures above freezing means higher than normal hydropower production. This is – as traders would say – bearish news for the energy market, meaning there is a chance we will see lower electricity prices this winter than during a normal winter.

For many of those living in southern Europe, however, this is probably just bad news. Colder than normal weather means more people will have to turn on their heaters, which will drive up energy demand, and could thus also lead to higher power prices. And because these countries usually don’t get much snow, it is unlikely they will enjoy a good skiing season.

Take a look at the forecasts yourself!

The EU-funded project S2S4E – in which CICERO is one of the partners – has developed a new long-term forecasting tool specifically tailored for the energy sector. It’s free to use and you can access it here. 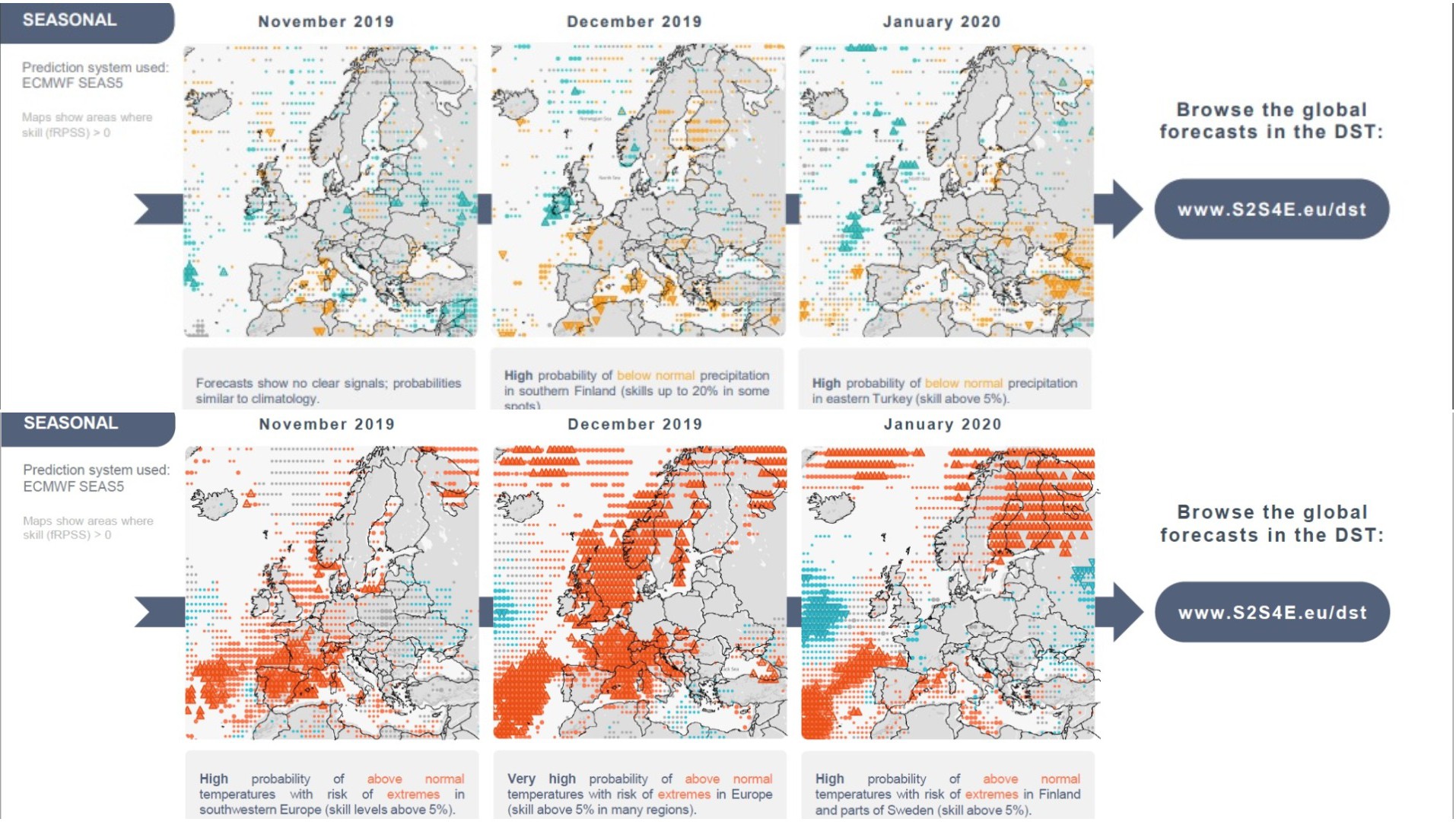 Forecasts from the S2S4E Decision Support Tool, the new long-term forecasting tool developed by the S2S4E project. CICERO is one of the partners in the project, which is led by the Barcelona Supercomputing Center.

Written by Nathalie Schaller and Iselin Rønningsbakk / CICERO. First published on the CICERO website on 25 October 2019