Between 18 and 19 September 2020, Greece was hit by the cyclone Ianos, a tropical-like storm also known as a medicane (compound word for Mediterranean hurricane). Four people died, while hundreds became trapped after Ianos flooded streets and homes, causing power outages, triggering landslides, and even collapsing a bridge in the city of Karditsa, in the central part of the country.

Medicanes are hurricanes occurring in the Mediterranean area, which have similar characteristics to tropical cyclones, and are observed less than once per year (0.86 events/year). Satellite images of medicanes generally show a cloud band with the shape of a spiral that surrounds the eye of the hurricane. Despite a small horizontal extent of a few kilometers and an intensity below category 1, medicanes can produce significant damage due to a combination of intense winds and heavy precipitations.

Karditsa was lashed by winds of up to 120 km/h and about 5,000 homes in the city were affected by flooding. The storm then headed to the Ionian islands, forcing the cancellation of flights and ferries due to the strong winds and huge waves. Ianos dissipated on September 22, four days after landfalling. The impact was severe in central Greece and a state of emergency was declared for the islands of Ithaca, Kefalonia, and Zakynthos.

Why do these tropical-like cyclones occur in the Mediterranean area?

“In late summer, the water temperature in the Mediterranean Sea may reach very high values and the particular orography surrounding the Mediterranean Basin favours the generation of cyclones that can evolve into medicanes,” explained Irene Cionni, researcher at the Italian National Agency for New Technologies, Energy and Sustainable Economic Development (ENEA) and involved in the S2S4E project.

Medicanes are likely to become even more intense in the near future, with higher winds, more precipitation and longer durations, according to recent studies, as Mediterranean Sea could strongly warm up, especially in late summer and autumn, due to the effects of climate change.

As Cionni detailed during the S2S4E webinar organised on 16 October to present the latest forecasts of the S2S4E Decision Support Tool (DST) for the autumn season, the high wind speeds associated to Ianos were predicted by the sub-seasonal forecast issued on 3 September, two weeks before the medicane. “The DST showed a prediction of extreme wind speeds for the week 14-20 September, with a skill of about 12% in the area of the Ionian Sea where Ianos developed.” 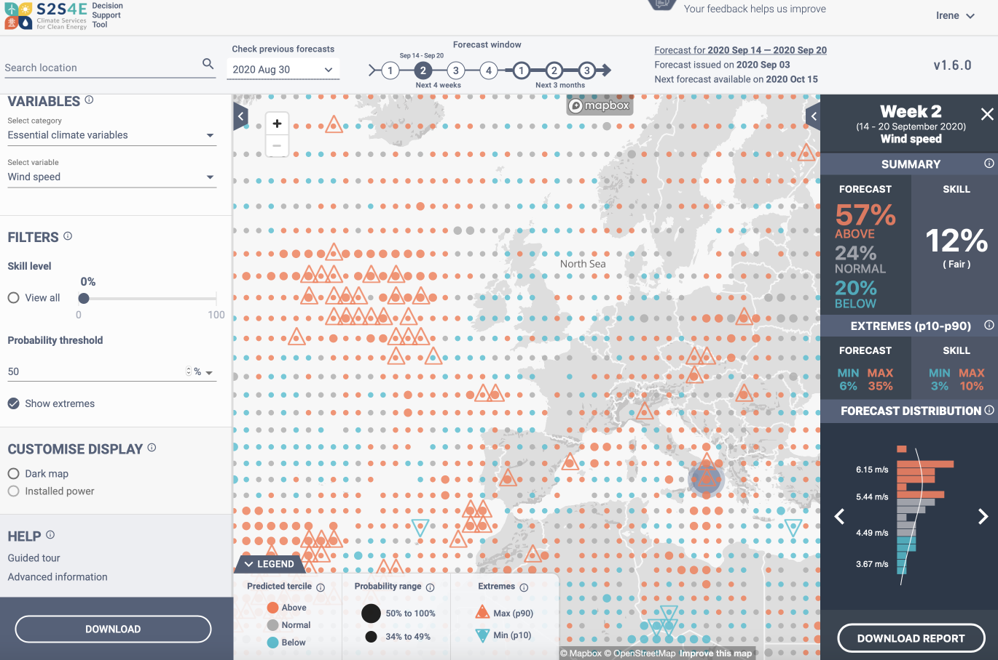 Figure 1: Screenshot of the S2S4E Decision Support Tool (DST) forecast issued on 3 September showing a high probability of extreme wind speeds in the Ionian Sea for the week 14-20 September.

These predictions can be especially useful for the energy sector as Mediterranean hurricanes usually impact the coasts of Italy and Greece, an area with several problems with power distribution. “An important issue may be the maintenance of offshore wind farms that can be strongly affected by the wind and waves. Italy and Greece have several wind farm projects in the area generally damaged by the medicanes”, Cionni warned.

"Multi-model predictions are more robust because they combine the signals present in many prediction systems and smooth out those that only appear in few of the predictions, turning into a consensus prediction", highlighted Lledó.

"The multi-model forecasts for January show high probabilities of below normal wind speeds around Germany, Poland and most of central Europe, with higher skills than those of SEAS5 predictions," remarked Lledó. Besides, mild temperatures that are above the normal for the season are expected throughout the Mediterranean, as well as in parts of central Europe and Scandinavia, until January 2021.

New energy indicators for the solar and wind energy sectors

The researchers also presented during the webinar the energy indicators for the solar and wind energy sectors that have been implemented in the latest version of the DST, released in October 2020. The new sub-seasonal and seasonal predictions of capacity factors can be used by a variety of renewable energy operators for operation planning and allow for a better comparison between different plants, irrespective of their size and type.

"Capacity factor forecasts are closer to the user decisions, which are ultimately interested in energy generation, electricity prices or total revenues," Lledó concluded.